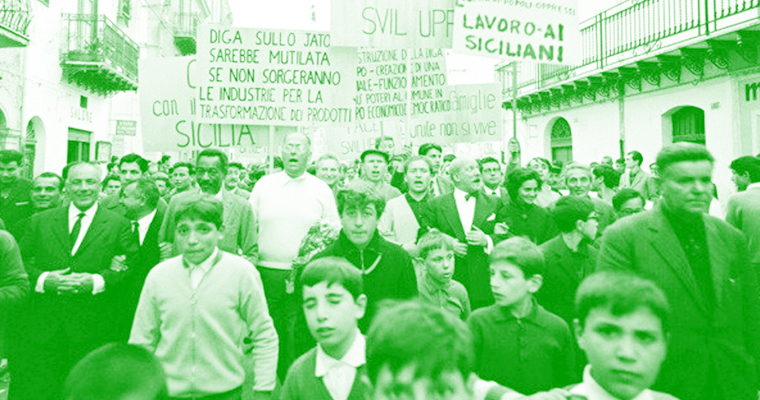 The Belìce Valley was a very active laboratory of civil struggle and participation practices, even before the earthquake of 1968. After that tragic event, the popular claims were intertwined with the vicissitudes of reconstruction: urban planning experiments, artistic utopias and political corruption. BELÌCE/EPICENTRO DELLA MEMORIA VIVA is a museum that tells the dreams of a people, the nightmare of the earthquake, the battles for democracy and reconstruction.

Belìce/Epicentro della Memoria Viva is a museum permanently “under construction” since it was born as a place open and lived by the people, an exhibition space in continuous evolution that is enriched with new contributions by those who inhabit or those who “pass” from the Belìce. The space preserves videos, stories, maps, photographs and documents that tell important and little-known stories of struggles and popular mobilization before and after the earthquake of 1968. The narration starts from the 50s, with the arrival of Danilo Dolci in Sicily, and goes through a thirty-year period, which is the foundation of both local and Italian history: in those years Belìce was a laboratory for practices of social action and forms of repression by the institutions.

In the museum Belìce/Epicentro della Memoria Viva the visitor is immersed in the history of a territory and its people, who in those years produced one of the most interesting experiments in participatory democracy in Italy, such as the “reversed strikes”, the investigations, the work of the Center for Studies and Initiatives for Full Occupation in Western Sicily by Lorenzo Barbera – founder of CRESM -,and finally the Committees for the development of the Belìce Valley.

The museum is funded by:
FONDAZIONE CON IL SUD

Link to the project:
BELICEEPICENTRO